Quantitative Aptitude deals mainly with the different topics in Arithmetic, which is the science which deals with the relations of numbers to one another. It includes all the methods that are applicable to numbers.
Numbers are expressed by means of figures – 1, 2, 3, 4, 5, 6, 7, 8, 9 and 0 —- called digits. Out of these, 0 is called insignificant digit whereas the others are called significant digits.
Numbers
A group of figures, representing a number, is called a numeral. Numbers are divided into the following types.
Natural Numbers:
Numbers which we use for counting the objects are known as natural numbers. They are denoted by ‘N’
N = {1,2,3,4,…….} are called rational numbers.
Or, the numbers which can be written in the form

{where a and b are integers and b

0} are called rational numbers.
Irrational Numbers:
The numbers which cannot be written in the form of p/q are known as irrational numbers (where p and q are integers and q

0).
Real Numbers:
Real numbers include both rational as well as irrational numbers.

= – (-2) = 2
(ii) After removing the bar, the brackets must be removed, strictly in the order (), {} and [].
(iii) After removing the brackets, we must use the following operations strictly in the order given below. (a) of (b) division (c) multiplication (d) addition and (e) subtraction.
Note: The rule is also known as the rule of ‘VBODMAS’ where V, B, O, D, M, A and S stand for Vinculum, Brackets, Of, Division, Multiplication, Addition and Subtraction respectively.
Example: Simplify 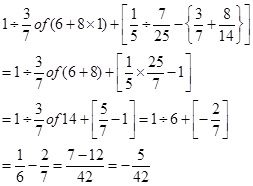 Rule 1: When the numerator and the denominator of the fractions increase by a constant value, the last fraction is the biggest.
Example: Which of the following fractions is the greatest?

Solution:
We see that the numerators as well as denominators of the above fraction increase by 1, so the last fraction, i.e.

is the greatest fraction.
Rule 2: The fraction whose numerator after cross-multiplication given the greater value is greater.
Example: Which is greater :

Solution:
Students generally solve this questions by changing the fractions into decimal values or by equating the denominators. But, we suggest you a better method for getting the answer more quickly.
Step 1: Cross –multiply the two given fractions.

is the greater of the two.
Example: Which is greater:

is greater.
You can see how quickly this method works. After good practice, you won’t need to calculate before answering the question.
The arrangement of fractions into the ascending or descending order becomes easier now. Choose two fractions at a time. See which one is grater. This way you may get a quick arrangement of fractions.
Note:  Sometimes, when the values are smaller (i.e., less than 10), the conventional method, i.e., changing the values into decimals or equating the denominators after getting LCM, will prove more convenient for some of you.
Example: Arrange the following in ascending order.

Solution: Method I
The LCM of 7,5,9,2,5, is 630.
Now, to equate the denominators, we divide the LCM by the denominators and multiply the quotient by the respectively numerators.
Like for

The fraction which has larger numerator is naturally larger. So,

Method III:
Rule of CM (cross-multiplication)
Step I: Take the first two fractions. Find the greater one by the rule of CM.

Now we see that

.
Therefore, we apply CM with

Step III: Take the next fraction. Apply CM with

. Next, we apply CM with

Step IV: With similar applications, we get the final result as:

Note: This rule has some disadvantages also. But if you act fast, it gives faster results. Don’t reject this method at once. This can prove to be the better method for you.